Our work (and this site) is devoted to sharing ideas, tools and resources that will help you automate, grow and scale your practice.

I’ve been questioning myself for a long time…

If everyone has the same number of hours in a day, why do some people seem to get so much more done than others? How do they do more, achieve more, earn more, have more?

One of my passions is to study how the ultrawealthy, the 0.001% manage their time, get incredible amount of things done, invest and live extraordinary lives?

This life-improvement masterpiece “One Thing” written by Gary Keller – the owner of the biggest real estate company in the world gave me the answer and inspired me to write the script for the next OMD TV video.

“Going small” is ignoring all the things that you could do and doing what you should do.

It’s recognising that not all things matter equally and finding the things that matter most. It’s realising that extraordinary results are directly determined by how narrow you can make your focus.

Question yourself…“What’s the ONE Thing you can do today or this week such that by doing it everything else would be easier or unnecessary? find your lead domino, and whack away at it until it falls and starts its amazing domino effect.

And remember…“Be like a postage stamp – stick to one thing you get there.”

Webinar: 3 MUST USE STRATEGIES THAT WILL GENERATE NEW PATIENTS & REFERRALS & BUILD-UP YOUR REPUTATION ON AUTO PILOT
https://onlinemarketingfordoctors.com/sales-funnel-webinar/ 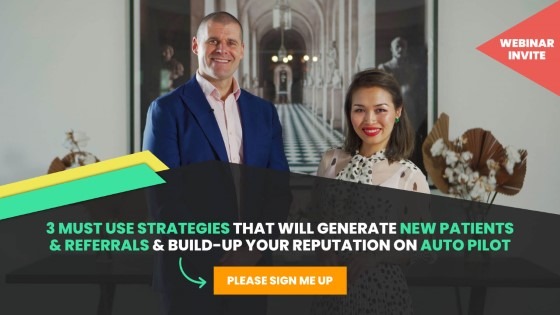 Have You Join The 5 Am Club?
https://onlinemarketingfordoctors.com/have-you-joined-the-5am-club/

CHECK OUT THIS EPISODE ON OMD PODCAST

Our work (and this site) is devoted to sharing ideas, tools and resources that will help you automate, grow and scale your practice.

#45: How to Attract More Affluent Patients?

#41: How to Attract More Affluent Patients?

IF YOU WANT TO DIVE DEEPER INTO OUR WORLD, THESE LINKS LEAD THE WAY

Listen to our podcast episode:
#75: What Is Your One Thing?

Welcome to OMD TV & Podcast show – the place to be to grow and scale your practice.

I’ve been questioning myself…

If everyone has the same number of hours in a day, why do some people seem to get so much more done than others? How do they do more, achieve more, earn more, have more?

If time is the currency of achievement, then why are some able to cash in their allotment for more chips than others?

The answer is they go small.

“Going small” is ignoring all the things that you could do and doing what you should do.

It’s recognising that not all things matter equally and finding the things that matter most. It’s realising that extraordinary results are directly determined by how narrow you can make your focus.

Going small is a simple approach to extraordinary results, and it works. It works all the time, anywhere and on anything. Why? Because it has only one purpose – to ultimately get you to the point. When you go as small as possible, you’ll be staring at one thing. And that’s the point.

Just think about the extraordinarily successful companies, they always have one product or service they’re most known for or that makes them the most money even though they are offering many other products or services. For McDonald, that’s their bugger, for Google, their one thing is their search engine, for Apple, that’s the Iphone, and what’s about Starbuck? I think you know the answer. You can relate this to your practice, what is the one procedure that you want to be known for and make you the most revenue? The most successfully practices know this and are always asking “What’s our one thing?”

I was reading this life-improvement masterpiece written by Garry Kelly who is an American entrepreneur and best-selling author. He is the founder of Keller Williams, which is the largest real estate company in the world.

Gary didn’t get this concept until much later when he hit a wall that when he began to connect his results with his approach. In less than a decade, he built a successful company with national and international ambitions, but all of a sudden, things weren’t working out. He was in turmoil and he felt as if everything was crumbling around him.

He decided to seek help and reached out to a coach.

His discussion started with a simple question to his coach: “Do you know what I need to do to turn things around?” I hadn’t a clue.

The coach said there was only one thing Gary needed to do. He had identified 14 positions that needed new faces, and he believed that with the right individuals in those key spots, the company, Gary’s job, and his life would see a radical change for the better. Gary was shocked and let his coach know he thought it would take a lot more than that.

It was a transformational moment. Gary had never considered how so few could change so much. What became obvious is that, as focused as he thought he was, he wasn’t focused enough. Finding 14 people was clearly the most important thing he could do. So, based on this meeting, he made a huge decision. He fired himself.

He stepped down as CEO and made finding those 14 people his singular focus.

This time the earth really moved. Within three years, they began a period of sustained growth that averaged 40 percent year-over-year for almost a decade. They grew from a regional player to an international contender.

And the most awesome thing happened. Results went through the roof.  Extraordinary success showed up, then they never looked back.

As success began, something else happened along the way. The language of the ONE Thing emerged.

The ONE Thing forces you to think big, work things through to create a list, prioritize that list so that a geometric progression can happen, and then hammer away on the first thing – the ONE Thing that starts your domino run.

So be prepared to live a new life! And remember that the secret to extraordinary results is to ask a very big and specific question that leads you to one very small and tightly focused answer.

The ONE Thing is real. If you put it to work, it will work.

So don’t delay. Ask yourself the question, “What’s the ONE Thing I can do right now to start using The ONE Thing in my life such that by doing it everything else will be easier or unnecessary?”

And make doing the answer your first ONE Thing!

For myself, I created a habit of working on my one thing of the day or the week by joining the 5 am club.

One of the best decisions that ‘ve done in the last few years in terms of getting all of my important work done and move the needle faster was to join the 5 am club 7 years ago and I’ve never looked back.

This is one of the key attributes for getting my business to grow 166% after the first year I’ve joined this club and I’ll show you why in this video.

Now, if your one thing is to double your new patient enquiries in the next 6 months, I would suggest that you attend our webinar called 3 Must-Do Strategies to Generate More New Patients and Referral webinar that we talk about on our previous shows, I would suggest that you spend one of those first early hours of your morning attending that webinar…

I’ll leave a link to it in the show notes so you can sign up.

Thanks for turning in and hope to see you in our webinar.

The 15 Secrets
to Doubling Referrals
To Your Practice

Sourced from our interviews with 49 physicians, surgeons, specialists and dentists.

SEND ME THE 15 SECRETS

SPOTS FOR July ARE ALMOST GONE!

Get your 100% FREE no-obligation 30-Minute Strategy Session Call ($500 Value) and we’ll show you our 7-step marketing system framework that help other clinics double their new patients enquiries in less than 12 months.

“The number of requests for consultations is at least doubled from the last 5 months, which is very good sign. I’ve enjoyed working with both principles.”

What to expect during your one-on-one?